The SDI Solution for Abercrombie & Fitch

CONSULTANCY APPROACH: SDI partnered with Abercrombie & Fitch to consolidate, optimize and reduce costs of their distribution operations within the confines of a specific footprint.

AUTOMATED SOLUTION: The implementation of the automated Bombay sorter has improved the efficiency with which items were sorted and has reduced labor force significantly.

ENHANCED OPERATION: The solution enabled A&F to decrease their footprint, decrease costs and increase the accuracy of their operations. 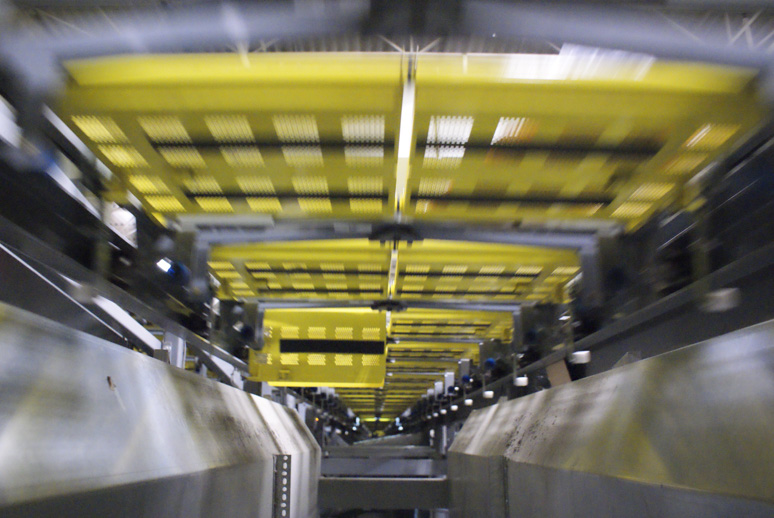 In 2008, Abercrombie and Fitch had two separate Distribution Centers with Put-To-Light systems, which were no longer as efficient as they once were. A&F started to reevaluate its volume, efficiency and footprint, and decided to consolidate all of the retail operations into one building.

The two DCs had to be consolidated into one 800,000 sq. ft. Distribution Center, the speed had to be improved, and it had to be able to handle peak volumes.

“When we built the sorter, we needed to be able to handle multiple units in a bag (prepack) in order to be able to handle peak volumes,” Todd Vallely, VP of Distribution said. “This really decreased the touches per item, one put is 4-6 units, so it allowed us to run even more volume on the sorter.”
“We really like that it’s very easy to use, it’s not an overly complicated system,” Vallely added. “It’s fairly easy to train people and have them get up to speed with everything very quickly.”
“We also came to SDI with different challenges,” Vallely said. “We wanted to use this sorter to sort direct-to-consumer orders, it was an out-of-the-box-thing and SDI’s been able to put together a plan that allowed us to do that successfully.”

This allowed A&F to cut their retail packing footprint in half from the previous process (from 200,000 to 100,000), as well as helping them to dramatically improve UPH and use less than half the people they used in the past.

David Abercrombie founded A&F in 1892 as an upscale sporting goods store. Forming a partnership with Ezra Fitch, the company continued to expand in the new 20th century. After Abercrombie left the company, Fitch became sole owner and ushered in the “Fitch Years” of continued success.

After his retirement, the company continued under a succession of other leaders until 1977. Limited Brands purchased the ailing brand in 1988 and brought in Mike Jeffries, who revolutionized the image of Abercrombie & Fitch to become an upscale youthful fashion retailer.

Today, the company is a multi-billion dollar entity continuing to experience economic expansion through the business continuance of three offshoot growing concepts and cautious international expansion into key luxury markets.

ABOUT SDI
SDI is an innovative provider of systems and solutions to the retail, wholesale, fulfillment and e-commerce industries for all aspects of distribution center materials handling.

As both consultants and systems integrators, the Company provides clients with a total logistics solution package which includes materials handling consulting, as well as design, engineering, fabrication, installation and integration services.

This website uses cookies to improve your experience while you navigate through the website. Out of these, the cookies that are categorized as necessary are stored on your browser as they are essential for the working of basic functionalities of the website. We also use third-party cookies that help us analyze and understand how you use this website. These cookies will be stored in your browser only with your consent. You also have the option to opt-out of these cookies. But opting out of some of these cookies may affect your browsing experience.
Necessary Always Enabled
Necessary cookies are absolutely essential for the website to function properly. This category only includes cookies that ensures basic functionalities and security features of the website. These cookies do not store any personal information.
Non-necessary
Any cookies that may not be particularly necessary for the website to function and is used specifically to collect user personal data via analytics, ads, other embedded contents are termed as non-necessary cookies. It is mandatory to procure user consent prior to running these cookies on your website.
SAVE & ACCEPT